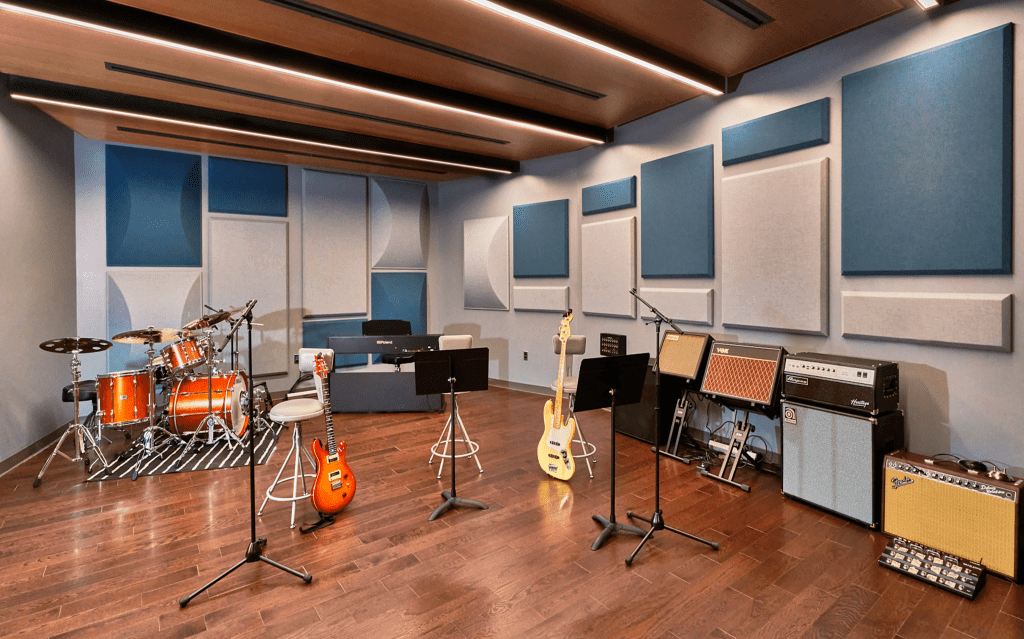 Middlesex County, NJ – As part of its expanding performing arts major, the Middlesex County Magnet School (MCMS) in East Brunswick, NJ has seen a significant growth of student interest in its Music Performance and Technology major this year thanks in part to the state-of-the-art Music Production and Recording Studio now being fully utilized after being closed for over a year due to the pandemic. The Studio, designed by SSP Architects, officially opened just prior to the pandemic hitting.

In its first three years, the Music Performance and Technology major – part of the East Brunswick Campus’ School of Arts – has grown from a small handful of students to enrolling more than 35. Graduates from the program have already gone on to study audio engineering and music business at Westminster College and Drexel University, while others have joined IATSE Local 59, the Stagehands Union through a partnership with the district.

The studio has seen many guests who have recorded and engineered with students including Conan Gray’s touring bassist Mistine, Well Wisher’s Natalie Newbold, and The Rascals’ Eddie Brigati.

Music Performance and Technology Instructor Andy Greatorex says, “The facilities and equipment at East Brunswick Magnet School are really world class. Since the studio opened, the number of quality applicants has grown year after year. We have been able to attract students by offering an experience traditional high school simply cannot.”

The transformation by SSP Architects to convert the long-unused former electronics shop into a customized, acoustically sensitive suite has been a major draw.

The growth of the Music Performance and Technology major was an important factor in MCMS being recognized in the 2022 NICHE Best Schools survey as #4 of 19 for Best High Schools for the Arts in New Jersey.

“Everyone that sees our studio is in awe. We give tours to industry partners, and guests immediately gravitate towards the space. Since it rivals the quality of many professional set-ups, it’s quite the draw,” says District Supervisor of Career and Technical Education Adam Recktenwald.

The Music Performance and Technology program’s rigorous curriculum required a combination of classroom spaces and real-world application space. SSP Architects had to create rooms for instruction, performance and editing/recording that were acoustically isolated from the adjacent trade shops. This was done with enhanced wall assemblies, vibration isolation, multiple sound seals, and thoughtful placement of HVAC units.

“The focal point of the suite is the recording studio. It is specifically shaped and fitted with an engineered layout of acoustical diffusers and panels to control sound reverberations. We’ve been told by school officials that the space is a musician’s dream,” said Marcus Rosenau, Principal of SSP Architects.

Among those involved in providing advice for the Music Performance and Technology curriculum was the Rock and Roll Forever Foundation established by Rock and Roll Hall of Famer Steven Van Zandt, who grew up in the Jersey Shore music scene. “Who knows, maybe the music program and studio will help inspire the next Steven Van Zandt or Bruce Springsteen,” said Rosenau.

A short video to highlight the program